View the trails and lifts at Meribel with our interactive trail map of the ski resort. Plan out your day before heading to Meribel or navigate the mountain while you're at the resort with the latest Meribel trail maps. 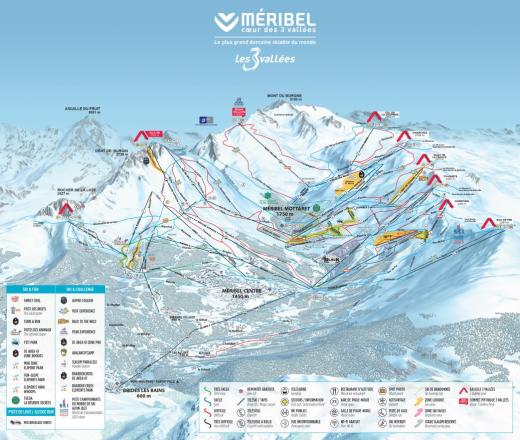 Meribel is located slap-bang in the centre of the largest lift-linked ski area in Europe - the Three Valleys (600km). The majority of Meribel's local slopes (150km) are above the treeline, but there are also sheltered runs for bad-weather days. The resort has enough varied terrain to keep all abilities happy: good, steep freeriding, plenty of long cruising reds and blues, as well as gentle tree-lined runs for beginners. Meribel's well-groomed runs are served by a fast, modern lift system (mostly chairs and gondolas). Advanced and expert skiers who want to stretch their legs can invest in a Three Valleys Pass and hop over to Courchevel or Val Thorens to cover some serious ground.

Meribel offers a good choice of powder faces. Mont du Vallon - the highest point in the Meribel Valley - has some of the steepest and freeriding which manages to stay relatively untracked. A short walk between two peaks off the Mont Vallon bubble will lead you to a huge off-piste bowl with some big drop-offs. Beware of avalanches here. Alternatively, take the Olympic Express chair to Roc de Fer then get off and ski straight until you drop into a 845-metre off-piste descent towards St Martin de Belleville; for the best snow, stay left. First-time off-pisters should head to the freeride learning areas - off-piste zones which are avalanche-controlled and made safe where necessary, such as the Moon Ride.

First-timers/Children: Families will find a small nursery slope at Rond-Point, often used by the children's ski school. Mottaret also has three enclosed beginner areas ‘Zen Zones' served by a covered magic carpet and the free village gondola. In the Altiport area, a new family fun park (Acticross) has been created.

Beginners: The tree-lined green run at Altiport is ideal for beginners. Not only is it sheltered, but it's long and wide, perfect for practising turns, and now a green run link has been created from the mid-station of the Saulire gondola so novices can ski all the way down from this point. The main slope is served by a fast chair and a free drag. After a few runs at Altiport, head over to the green and blue runs at Mont du Vallon.

Intermediates: For morning sun, heading up to Tougnete or Mont de la Challe are the best bets. Here you'll find relatively quiet red and blue runs leading back down to Meribel. Some of the best slopes in the resort are just south of Mottaret, in the Plattières-Vallon sector at the head of the valley, with its good choice of long reds and blues. The Côte Brune fast quad from near here goes up to Mont de la Chambre, giving direct access to Val Thorens. For afternoon sun, take the gondola from Meribel or Mottaret up to Saulire, for a good choice of long red runs leading back down to Meribel.

Advanced/Experts: In the Meribel valley, head to Mont du Vallon for its long, steep red Combe Vallon run. Alternatively, take the off-piste run in the neighbouring valley, next to the main pistes, which leads back to the bottom of the gondola. From Tougnète, there's a good selection of steep runs back to Meribel - particularly the black upper Ecureuil piste and red Combe Tougnète. The Face run on the north side of the valley is served by a fast quad and is a good cruising slope. Mogul fans should have over towards Mont de la Challe for the mogul run down the side of the double Roc de Tougne draglift.

New to 2012, a DC Area 43 snowpark was set up in Meribel-Mottaret. This 1,200-metre-long snowpark is equipped with 24 snow canons and served by two lifts. Here you'll find one mini-skate ramp, three street lines, 220 metres of rails and an airbag for beginners.

Watch the first shred at the DC Area 43 in Meribel-Mottaret:

The Moon Park, Meribel Alpina's snowpark, is accessed by the Arpasson chairlift and offers lines for beginners, intermediates and experts. You'll find an  intermediate boardercross (red), whoops, tables, rails, boxes (all made from wood) and a Chill & Grill area. Freestylers can purchase a three-day Moonpark pass for €50 (days don't have to be consecutive).

Watch the action at Moon Park: