View the trails and lifts at La Plagne with our interactive trail map of the ski resort. Plan out your day before heading to La Plagne or navigate the mountain while you're at the resort with the latest La Plagne trail maps. 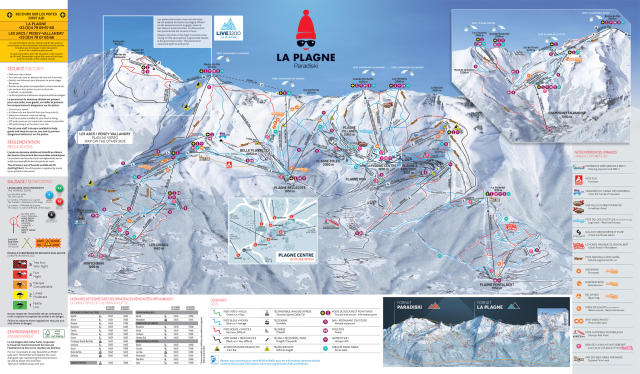 The basic fact about La Plagne (1,800-2,100m) is that 80 percent of ski runs are above 2,000 metres, between the Glacier de Belle Côte (3,250m) and the apple orchards in the valleys. The 130 ski runs are split into 18 black, 33 red, 69 blue and 10 green, a total of 180 kilometres of runs. If that is not enough there is the Vanoise Express, which links Les Coches with Les Arcs Peise in just under four minutes, offering access to another 235 kilometres of runs. Some say the resort is a bit flat for boarders. Anybody who has tried all the black runs and the many backcountry trails will smile at that. The six altitude resorts containing the bulk of the accommodation, are all around at 2,000 metres. Not all the accommodation there is literally ski-in ski-out, but none is further than 100 metres from the ski runs.

There are 80 kilometres of cross-country trails - all of which are ideal of snowshoeing and some of which are prepared for skating.

The facilities for children are first class and each village resort has its own childminding centre and snow play area where the children can learn to ski through play and enjoy themselves meanwhile the parents can get off and ski without stress, knowing the kids are having fun and being looked after.

Avoid French school holidays if you can (2012: Feb. 11 to March 10). You will save quite a lot of money and avoid a time when the more popular runs tend to be quite crowded and there can be delays on the lifts.

La Plagne was linked to Les Arcs in 2003 by the biggest cable car in the world, the Vanoise Express, and good skiers have access to a vast, awesome off-piste ski area. To get the greatest benefit from your stay get yourself a guide. Split between a group the cost is not outrageous but it is certainly worth it. This is not just for off-piste but to get the best of the ski runs. Your guide will help you avoid the crowds and find the best powder, whether it is on the north face of Bellecôte (3,200m), on the strikingly beautiful descent of the Cul du Nant glacier or in the great forests that lead down to the villages of Bozel and Macot, places you would find it difficult to find on your own before, all too soon, the moment to go home is upon you.

You can hire a guide as a small group or as an individual for €300 a day in low season or €345 in high season. If you are a good skier (i.e. comfortable on a red run) you can join a day group led by a guide and improve your snow skills in different conditions and types of mountain terrain. The trails are either direct from the ski lifts or start after a short approach trek. Lunch can either be out of the haversack or in one of a number of the high alpine chalets that serve food.

A good circuit to start with is around the summit above Plagne Bellecôte, the Mont Saint Jacques. Start from the top of the L'Arpette ski lift, pass the Tête d'Arpette on the left hand as you face it. You will then arrive at the col between it and the Mont Saint Jacques. From there the descent of the Combe du Grand Clapier gives you excellent snow and a fine view of Mont Blanc. Continue down through the pine Forêt des Frasses to the La Roche ski lift at Aime La Plagne, a descent of 650 metres.

The black ski runs are not all pisted so it is a good place to try out your off-piste skills on a ski run that is otherwise marked out and monitored.

The black/red Mont de la Guerre run is nearly seven kilometres long, from the top of the Les Verdons through some of the La Plagne's most beautiful powder slopes right down to Champagny. The run is marked and secured for safety but not pisted.

You may also want to try your skills on the Jean-Luc Crétier Slalom stadium at Plagne Centre used for international competitions or go across to Les Arcs and attempt to break the ski speed track record (250,74kph over 1740m). After free fall parachuting it is the fastest sport in the world.

A great experience is to join the pisteurs as they go up to open the resort. Maximum participation is limited to 40. You get given breakfast and have the rare privilege of being the first to ski on virgin snow from la Grand Rochette. Slight problem: you have to be there at 7:40 a.m. Also it is only every other Thursday.

It is possible to organise Héli-skiing with a guide on the Italian frontier as landing skiers is forbidden in many parts of the French Alps.

La Plagne is a great resort to learn to ski and develop quickly into an intermediate skier and beyond. In each of the six altitude villages there are a number of runs coded violet for absolute beginners with free mini ski lifts. Belle Plagne has a magic carpet for beginners in the resort. Once you graduate to blue runs most of the resort is open to you and you can ski down from the top of the Grande Rochette and Les Verdons to Plagne centre or even from the top of the Belle Cote (3,417m) down to Belle Plagne via the Roche de Mio. There is a great short blue run on the glacier right at the top and if you want to you can come down in the cable car. It is a marvellous spot to enjoy the great views all over the Alps around you.

For skiers who enjoy a well groomed ski surface this too is the resort for you. The runs are wide and perfectly maintained  - great ski ‘motorways' all over the resort. Small children happily follow their parents and sometimes lead them on red and blue trails around the Roche de Mio and l'Arpette, Les Dunes and Les Laines runs.

There are no problems about languages and English children, even the ones staying with Espirit Ski in the very British Deux Domaines (or Surrey on Snow) enjoy their time with their French instructors.

The Snowpark de La Plagne is just above Belle Plagne. It is divided up into four zones with differing levels of difficulty for those with little experience of freestyle skiing up to the real pros. The jumps are graded green, blue, red, and black just like the ski runs. There are about 20 different units including rails, tables, a figure S, a wave and a variety of other fun box items. They are regularly changed so that the visitors do not get bored with what the park has to offer. There is a Big Air safety bag to allow for new and more difficult moves in complete safety. There are also a half-pipe, a super half-pipe and a bordercross track. A new innovation this year - freestylers can look at a film of their latest efforts and download onto a mobile phone or share them on the web.

The Little Park is conveniently placed in Belle Plagne with a half-pipe and two freestyle areas that enable everyone to find their own level on different units at different levels of difficulty. Everything has been worked out to help beginners and those who want to improve and eventually do the moves they dream about. The entrance is from the top of the Col du Forché ski lift. The design of the park is aimed at beginners and those who want to try different figures in safety.

The Freestyle Park Initiation Fun Zone for the young beginners at Plagne Montalbert in a safe area with bumps, a bordercross track, rails, tables and the chance to try slalom in parallel. A whole new world of winter sports to learn at your own pace.