View the trails and lifts at Les Arcs with our interactive trail map of the ski resort. Plan out your day before heading to Les Arcs or navigate the mountain while you're at the resort with the latest Les Arcs trail maps. 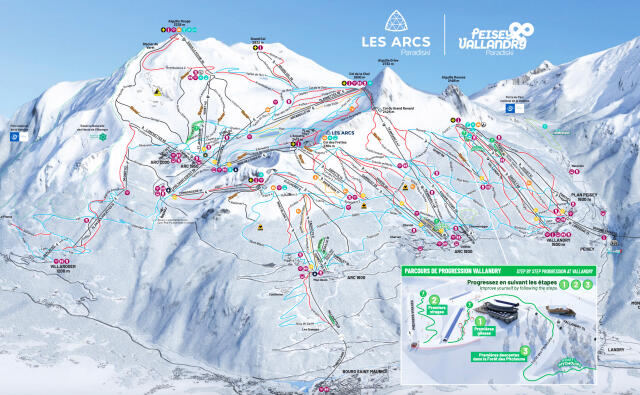 The slopes and lift network of Les Arcs are among the most extensive in the world. More than 100 pistes for all ability levels add up to 200km of marked trails, served by more than 60 lifts. The skiable vertical of 2,026m is world class and the terrain available is more than doubled if you purchase the Paradiski pass (425km) which then includes the runs of neighbouring and lift-connected La Plagne.

All of the skiing is well integrated with a high-speed lift network – there are no walks or bus rides required to make connections – and you can reach a very snowsure height of 3,226m. But you don’t need to head that high for great snow; most slopes north facing with extensive snowmaking systems so snow cover is rarely a problem.

Unsurprisingly, given the scale of opportunities available, Les Arcs offers something for everyone: wide, gentle green pistes; steep, high-altitude glacier runs well above the treeline; sheltered descents through the forest; as well as a vast amount of off-piste terrain in between all these groomed slopes.

The longest groomed trail is 7km in length and the 19 black runs adding up to some 43km of piste in that category alone is one of the highest percentage of steep terrain in the Alps – but still leaves nearly 160km of fast cruising terrain suited to beginners and intermediates.

Les Arcs has a great reputation for off-piste terrain; the resort covers a huge area and much of it is outside the groomed motorways. The north face of the Aiguille Rouge is highly regarded with its long ridge opening up a myriad of off-piste options in what are the few remaining areas of the Tarentaise not yet filled with lifts and pistes.

Iconic trails include the steep Couloir en S which pitches at up to 45 degrees and the 7km, 2,000m-vertical descent from the top of the Aiguille Rouge down to Villaroger. It’s also a popular excursion to take the Vanoise Express over to La Plagne and then ski down through the Nancroix forest.

Given the scale of terrain available, if you’re not totally familiar with the dangers of off-piste skiing it’s essential to employ a guide but there’s also the Avalanche Parc up at Col de la Chal where you can research avalanche information and practice using search and rescue equipment free of charge.

If you prefer to stay on the piste but experience ungroomed terrain, you can choose one of the 10 runs which are made safe and signposted by ski patrol but are left ungroomed: Varet, Crêtes, Dou de l’Homme, Lanches, Robert Blanc, Génépi, Bois de l’Ours, les Bosses, les 2 Têtes and Malgovert pistes.

Les Arcs also has a speed riding school up at Arc 2000, the largest in France, where you can hit the powder with a small paragliding sail on your back to get some really big air on your descent. You don’t need to be a pro skier to do it, just confident on your skis. Taster sessions are €85 with a full week’s course €475.

Les Arcs is a very family-oriented resort, on and off the slopes, with 75-percent of terrain rated easy or intermediate and more than 50 blue runs to choose from.

In general terms the terrain becomes progressively more challenging the further you ascend with gentle runs through the woods down at Arc 1600, then the heart of the ski area is home to many wide cruising blue and red pistes as you move above the treeline, and then the upper runs on the exposed Aiguille Rouge offer some of the greatest challenges. A sign as you board the cable car up here advises that only good skiers should attempt to ski down. There are red as well as black options.

The resort has a long-standing reputation for excellence in ski tuition dating right back to the 1970s when it pioneered ‘ski evolutif’ which saw first-timers learn proper technique (rather than progressing from snowplough) on progressively longer skis. This teaching method was superseded by the arrival of carving skis, but Les Arcs has sought to maintain its leading status as a teaching resort and operates a number of learner-only areas close to the resort bases, complete with easy to ride conveyor lifts serving very gentle gradients. The most recent opening is at Arc 2000 close to where the Olympic Flame is located commemorating the resort’s role in the 1992 Albertville Olympics. Both adult and child beginners are welcome to use these facilities.

Once all are capable of basic turns, families will all enjoy a run down the Milka piste at Arc 1800 which is complete with information panels on local fauna and flora and cut ot shapes of the same on the off chance you don’t spot the real thing out on the snow.

The once you’re more confident still you can test just how fast you’re sliding on the automated speed test course up at Arc 2000. The start of the course is accessed from the Plagnettes chair lift and at the bottom an electronic sign will tell you how fast you’ve skied. Les Arcs is keen to stress that the point of this is to warn of the dangers of excess speed on the piste, not to encourage speeding!

Les Arcs plays a very important part in the history of freestyle. Always a pioneer of ‘nouveau’ snow sport, something very similar to a snowboard was seen on the slopes here some years before Jake Burton created ‘the first’ snowboard, and many other sliding devices too, most notably the monoski, which were popular here when unknown elsewhere. Ski movies of the modern variety were also first shot in Les Arcs, including the pioneering Apocalypse Snow films.

The main terrain park here takes its name from those famous films. The huge Apocalypse Park in the heart of the ski area just above Arc 1600 has a vast array of terrain features and lines for all ability levels over tables, hips, a funbox, pyramid and jumps of various sizes.

There are other attractions dotted around the huge area too, including a great boardercross course up at Arc 2000 where the Piste du Plan Vert is divided into two rolling boardercross routes for different confidence levels.

There’s also a second smaller park, the Rey Park, with two lines suitable for novices or advanced riders, as well as a second boarder cross course at the opposite end of the slopes at Peisey Nancroix, with access from the top of the Peisey chair lift.

With a Paradiski pass you can also head across the Vanoise Express lift for over snow access to La Plagne where more world class terrain parks await just minutes away.