View the trails and lifts at Sestrière with our interactive trail map of the ski resort. Plan out your day before heading to Sestrière or navigate the mountain while you're at the resort with the latest Sestrière trail maps. Click on the image below to see Sestrière Trail Map in a high quality. 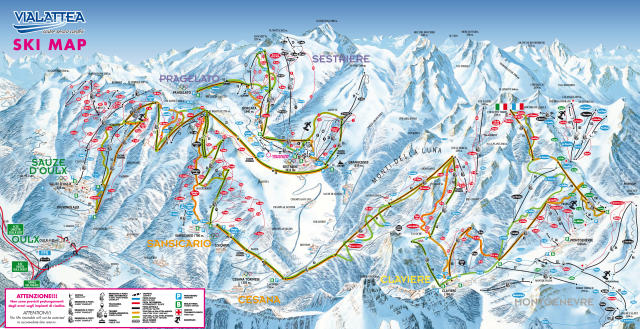 Sitting at 2035 metres on north-west facing slopes, the town of Sestriere forms part of one of Europe’s largest ski areas – the 249 miles long Via Lattea or Milky Way.  The area comprises 146 skiable pistes which make up a total of 400km of runs - 120 of these are blasted with artificial snow in order to maintain their peak condition hence Sestriere’s reputation for being snow-sure.

The local runs are found in two main sections: Sises, located in front of the village, and Motta, above Borgata.  Motta (2,823m) is higher than Sises and provides plenty of vertical including the steepest run in the region.  Sises too offers a world class run, the Col de Sises, from where expert skiers can access great off-piste.  Mt Fraiteve can be reached by jumping in a gondola from the West side of the town.

The resort hosted the Winter Olympics in 2006 and freeriders have access to some technically difficult and testing runs.  The black run from Motta down to Val Chisonetto is one to test your mettle on.  Freestylers are less well catered for but there are some decent natural hits to be found.  As for snowboarders, they seem undeterred by the large number of drag-lifts, returning year on year to carve up the terrain.  A number of the schools at the resort offer snowboarding lessons and the snowpark, which caters to all levels, has a dedicated area where beginners can safely learn the basics of freestyle.

Beginners: Beginners certainly won’t be left wanting however for real newbies there are better resorts. Blue and green runs can feel more challenging here particularly if the slopes are icy due to a lack of snowfall (which despite Sestriere’s elevation isn’t uncommon).  The nursery runs are good and there are a number of easy runs located above the ski school meeting point near the centre of the resort.  Borgata, a lift ride away, has gentle blue runs which favour more confident beginners.  And Sauze also has smoother runs for beginners to get their ski on.

Intermediates: Sestriere comes up trumps for confident intermediates who can take advantage of the vast and varied terrain on offer.  Steeps, mogul fields, wooded areas and wide panoramic runs – Sestriere has plenty.  It’s easy to ski to neighbouring Montgenevre via intermediate trails which has overclassified its black runs – perfect for intermediates looking to increase their confidence and technical ability. Also, try the narrow chutes from to Claviere from Pian del Sole.

Advanced:  Sestriere has hosted several winter championships and advanced skiers have access to some technically difficult and testing runs as well as some excellent off piste.  The black run from Motta down to Val Chisonetto is one to try and on the Mongenevre side there is wild terrain around Col Vert at the top of Le Rocher de l'Aigle chair lift which attracts snowboarders. Heli-skiing is also big here and the experience is well worth the expense http://www.pureski-company.com/en.

Other favourite runs for expert skiers include the Women’s Olympic downhill run – number 79 – from Monte Fraiteve and the Men’s World Cup downhill course at the top of Sises. Tree skiing in Sestriere is highly rated by expert skiers – there are lots of wooded areas which are much less dense than those in the French Alps which means that powder can stay untracked for days.