View the trails and lifts at Morzine with our interactive trail map of the ski resort. Plan out your day before heading to Morzine or navigate the mountain while you're at the resort with the latest Morzine trail maps. 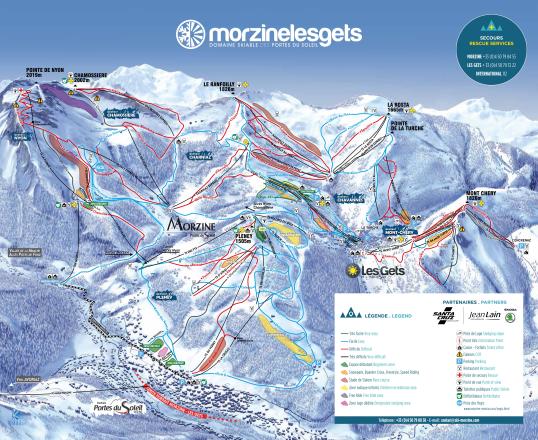 Morzine is just one of 14 resorts in the massive Portes du Soleil ski area. All in all, the domain offers 650 kilometres of pistes served by 195 lifts and 694 snow guns stretching across the French-Swiss border. If it all sounds mind-boggling, don't fret-Morzine has managed to maintain its mountain village feel, with wood chalets, slate roofs, and old stone buildings.

Morzine is sandwiched between Les Gets and Avoriaz. If you don't think you'll cover all 278 pistes of the Portes du Soleil Pass, you can opt for a Morzine-Les Gets Pass, which is good for 64 runs or an Avoriaz pass for 49 pistes.

These two passes are good for skiers up to advanced beginning level, or for anyone who just wants a gentle, relaxing ski holiday. Plus, many of the Morzine-Les Gets pistes run through forested areas, making for a pleasant backdrop to a quiet ski day. As for Avoriaz, the pistes are higher up, so the snow quality is better longer.

If you're intermediate and up, a Portes du Soleil Pass will be worth the money. It opens the way to 106 blue runs, 100 red runs, and 20 challenging black runs, including the Hauts Forts at Avoriaz and the Swiss Wall at Les Crosets.

Morzine offers a good starting base for off piste skiing, since the Nyon and Chamossière lifts run to the top of the mountain and can get you away from the groomed areas without having to climb on foot. Nyon has a good choice of itineraries between the groomers, so you can choose depending on how adventurous you feel. Just be careful not to go through the trees leading to the Vallée de la Manche - on the other side is a drop off.

An alternative choice is the Pointe d'Angolon, on the left of the Chamossière lift. The arrival point offers a fantastic view of the Mont Blanc before skiing on the ridge to the Col d'Angolon. Just be careful, because this area is prone to snowslides when there is a lot of fresh powder. You can then ski down into the bowl and come out at the lift to ride back up and do it all again. Because it is so accessible, the area can get tracked out, but since it is so spread out, you should be able to do a few runs while the snow is still ideal.

In terms of challenging pistes, Morzine offers nine black runs and 29 red runs, some of which could actually be considered black if they didn't run right into the village. Pistes A, F, and R are pretty steep for red runs, but at the same time wide enough for making large turns.

The red Aigle Rouge is a sharp switchback slope but for an exciting variation, you can short cut the switchbacks by taking a steep off-piste drop that runs back to the piste afterwards. You can also choose to take the AIgle Noi, a bumpy black, or the red Combe, both of which run down to the Pointe lift.

With five green and 23 blue runs, Morzine is an ideal destination for beginners and lower-level intermediate skiers. Since easy slopes tend to be near the base village, natural snow conditions can be variable, but the resort makes up for this with a thorough network of snow guns.

On the Pleney side, you'll find a special beginner area, with wide tree-lined slopes where you can learn to ski in a pretty setting. This also runs into some gentle and easy enough blue runs that can be done after a few tries on the greens.

However, this area gets very crowded during the school holiday times, sometimes, with up to a 10 minute wait for some of the magic carpets.  As soon as you progress beyond an absolute beginner level, it's a good idea to try the blue runs, which tend to disperse the crowds a bit better.

Piste B, C, and D are all good options, none of which are steep or tricky. Piste B is the longest and thus, the gentlest while Piste C has just enough slope to challenging advancing beginners.

Another option is the Proclou area, on the Super Morzine side of the resort. It is the largest and widest zone where you can learn to ski and is the base camp for the Avoriaz Ski School. But like the Pleney area, it gets crowded during peak weeks, so come here to build your confidence, then fan out to the less crowded runs.

Morzine is Avoriaz's next door neighbour, and as such is pretty light on park and pipe opportunities. If you are looking for some serious park time, you really should head over to Avoriaz, where you'll find different parks, including The Stash, which was designed by Burton and all features ecological modules.

Avoriaz groups its park and pipe areas collectively into the Avoriaz Snowzone, made up of five parks, a really big superpipe (120 metres long and six metres high), and two boardercrosses. All in all, these are some of the best and most varied area for freestylers of all levels and even kids, thanks to the Lil'Stash park.

The Chappelle park is good for practicing jumps, since they come in threes, meaning more jump for your queue time. It also has progressively difficult beginner to intermediate modules, you can ride at your level.

The Arare snowpark is for more advanced freestylers, with big modules and skiers rotating, flipping, and spinning in every direction. You'll want to build up speed to clear the modules, so this one is not for the faint of heart or lower intermediate levels. But they can always watch the spectacle put on by the other skiers and boarders.

Morzine itself does offer a 200-metre-long boardercross in the Nyonet area as well as a park accessible via the Nyon lift. Here, you'll find a few easy jumps and a rail or two, but nothing spectacular. It's good if you just want to test the park experience, but if you're looking for something special, head to Avoriaz.