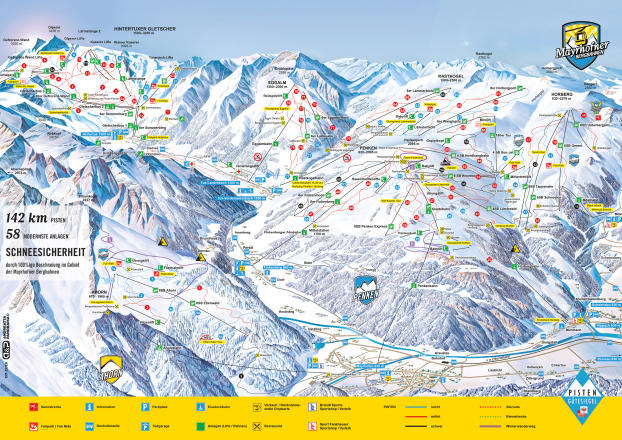 Mayrhofen and its interlinked neighbours – Lanersbach, Finkenberg and Hippach – have some 55 lifts serving 135km of piste. And a lot more if you splash out on a Superskipass for the whole Zillertal (177 lifts and 489km of piste) too. Reds rule here: 23 of the 45 runs are red and a fair few of the 16 blues would easily pass for reds. Only six blacks but then one of them is the Harakiri, the steepest marked run in Austria.

Beginners: For starters take the Ahorn cable car for the resort’s best nursery slopes. Beginners will find plenty of wide gentle slopes that are likely to have a generous covering. The downside is it’s not so easy meet up with your more experienced friends as they’ll likely be skiing in the separate Penken area. If you can persuade them to join you they will at least avoid the peak-time queues on the Penken cable car and once they’ve limbered up on the flat stuff they’ll find some steeper advanced runs as they head down the mountain. There are also some starter slopes near the Penken cable car drop-off so some quid pro quo and all can find something to suit.

Intermediates: This is where the Hof really comes into its own. The Penken – above the treeline – offers acres of sweeping pistes and, while steepish, are broad enough to practise some speedy carving without fear of thumping a tree or plummeting off the peak. The Tuxer Glacier – while also steep – has similarly sweeping trails that provide a testing but satisfying ride for the not-quite-newbs.

Advanced/experts: Harakiri baby! Knock yourself out – or worse. At 78 per cent this is the steepest marked slope in Austria. To get steeper you’d have to jump out of a plane. Fortunately the Harakiri run is short, so genuflect, close your eyes and think of England or whatever place you come from. Elsewhere you’ll find plenty of piste for seasoned snowmen and women including some blues that would be reds if they were anywhere else in the Alps.

Off-piste: No shortage of OP opportunities but runs get tracked out by mid-morning so go early or go home, as they say. Best to wait for a good dump and then try the north side of the bowl near Penken Park. Obviously with good snow comes good chance of avalanche – not unusual in Mayrhofen – so go with a guide or go prepared. Try the run beneath the Tux 150 lift for a challenge or take a run down to the park from the back of the Schneekar lift.

Snowparks: For many freestylers the Vans Penken Park (2,100m) is up there with the best in the Alps. Six separate areas on the sunny side of the mountain provide for pros, beginners and everything inbetween. Highlights include the rainbow box, a vast wall ride and the Multijib Beastbox.